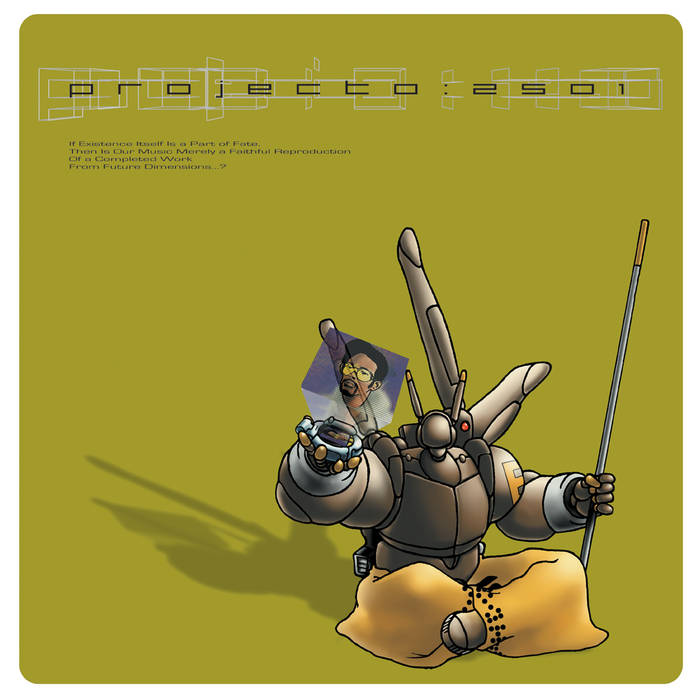 Stefan K. Fluid Motion is a track I got unnamed from a USB stick off a friend of mine 10 years ago. I finally found it, and the DigiDestruction instrumental with it. Favorite track: Layer 06: Fluid Motion.

If Existence Itself is a Part of Fate,
Then is our Music Merely a Faithful Reproduction
Of a Completed Work
From Future Dimensions...?

What Is PROJECTO : 2501 ?
A Storybook Record about a nanotech lifeform, as played by Souls of Mischief's Tajai, who breaks out of his circuit and tries to destroy humanity in an attempt to ironically preserve life.

What's The Official Story ?
A burgeoning hologram finds himself discontented in The Wired, and frees himself of his confining circuit in an explosion of fury. Now capable to go wherever he so chooses, The Entity embarks upon a journey to seek out the destruction of the human collective in PROJECTO : 2501.

Who Did the Beats ?
All music production was handled by SupremeEx (Yameen); a hiphop producer from Philadelphia. A friend and Jungle producer from the UK once said of his style, "There's a mad charm to it: Anime, PSX and Shrooms". Within the "PROJECTO" story, it is SupremeEx who helps fold the limitless Multiverse to help aid The Entity Lifeform reach his quest for Human Obliteration.

Who Else Is Involved With The Project ?
Terracotta Troupe emcee, and one of URB Magazine's "Next 100" (April, 2000), Shing02 plays a Netrunner whose body has undergone numerous cybernetic upgrades, leaving him with a remaining 12% of his original human tissue composition. Making his way from Trelawny, Jamaica, Major Terror plays the role of a shapeshifting Alien who commands massive amounts of clone troops to help The Entity Lifeform accomplish his mission. Accompanying DJ's include DJ Low-Budget, DJ Nozawa and Hieroglyphics' JayBiz.

And The Artwork ?
The artwork was meticulously illustrated by digital artist Colm of OneUp Design Studios. Art Direction for the entire project was handled by web designer, Stinke who is best known for his work at hieroglyphics.com and aesoprock.com. Trading Cards were produced to help submerge listeners deeper within the story, consisting of character Bio's and background history. 2 trading cards will come packaged with every record, of which there are 4 total to collect.

All songs produced by SupremeEx (Yameen). All lyrics unless otherwise noted performed by Tajai.

Bandcamp Daily  your guide to the world of Bandcamp

Featuring Gary Bartz, 5 years of Rhythm Section Intl and an LP of the week by Nicolas Jaar